Is it Fruity Drink O’Clock yet?

Taking a cruise had never really crossed my mind until my friend Michelle told me what a great time she had on a 3 day cruise to the Bahamas. So when she sent out the invite for the girl’s cruise this year I was on board (pun intended!). There ended up being six of us that went – Michelle, Kathy, Renee, Stacy, Jana & myself.

Thursday, March 13th/Friday, March 14th
Who thought taking a red-eye would be a good idea? It was a good idea until I was at the airport waiting for an 11 p.m. flight instead of home in my bed. As I was walking towards my gate I ran into my friend Kristi, who was coming home from a business trip to Vegas. You never know who you will run into at the airport!! It was fun to see her. My flight took off late, but we must have made up time in the air. I didn’t get much sleep so I was a bit out of it on Friday. After landing, I met up with Kathy at Starbucks. I really could have used a Starbucks! Only two more weeks of Lent… Michelle, Kathy, Renee & Stacy had flown in the day before and had gotten a hotel room at the airport. Kathy & I went upstairs where I was able to take a shower which made me feel a little more human. Jana’s plane arrived and we met her at baggage and boarded the shuttle for Port Canaveral. After boarding the ship, we headed for the spa to make our appointments. Before the ship could sail, we had to do an emergency drill which involved us putting on our life jackets and evacuating to the 7th floor. To make it more interesting as we were about to

evacuate we noticed there was standing water in our bathroom. After the drill was over, we called maintenance to check out our bathroom. With the drill over, the ship set sail and it was time for a fruity drink on the top deck! We made our first visit to Johnny Rockets (one of several) where Michelle & Kathy danced with the waiters. And then it time for a nap before dinner. Normally I am not a good napper but I was so tired it was not hard to take a nap. Before dinner, we went to a comedy show. After dinner we played bingo where Michelle was the big winner!! It wasn’t much later after that I went to bed as it had been a long couple of days. 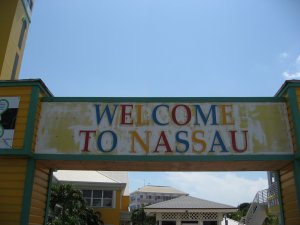 Jana & I had massages scheduled for 9:15 a.m. so we requested breakfast to be delivered to our room between 8 and 8:30 that morning. The phone rang at 7:44 a.m., waking us up, to tell us our breakfast was on the way. Jana & I both jumped out of bed to answer the phone and ran into each other in sort of a 3 Stooge

s moment. Gotta love the small rooms! The massage was good. We met up with the rest of the girls at Johnny Rockets for lunch. After lunch we left the ship to explore Nassau. Jana & I went to the Pirate Museum before heading to the beach while Michelle, Kathy, Renee & Stacy headed to Senor Frogs and then the pool deck. Jana & I went to the Captain’s reception before meeting up with the other girls for dinner. The ship was to set sail around 12:30 a.m. and I didn’t think I was going to make it that late but when I realized it was just about that time and we were still sitting in the bar chatting. Michelle & I headed up top to watch the ship pull away from Nassau before heading to bed.

Sunday, March 16th
We did not order breakfast for this morning so we were not woken up early! Instead we slept in. We took the little boat (tender) out to the island of Coco Cay (the island’s real name is Little Stirrup Cay). Coco Cay is the cruise line’s private island and we did nothing but enjoy the beach. 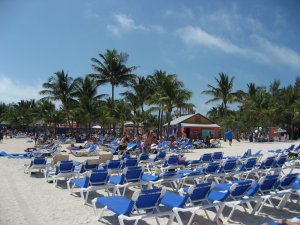 The floating mats were fun! My last trip to a more “tropical” location (Cabo) resulted in me getting extremely sunburned. I learned my lesson and continually reapplied sunblock, but I still got sunburned. Not as bad as Cabo, but still painful. Jana & I headed back to the ship a little earlier than everyone else because we had massage appointments at 3 p.m. I had a hot stone massage. The massage was not as relaxing as it could have been due to the fact the spa was located directly underneath the basketball court. Whose genius idea that was I’m not sure. It also would have been more relaxing had the attendant not tried to sell me all sorts of products. Jana & I grabbed a slice of pizza afterwards and ate on the deck. We should have realized a storm was potentially brewing when a piece of pepperoni blew off of Jana’s pizza. We watched the farewell show before heading to the dining room for our last dinner. We had all gotten sunburned and were all in some degree of pain by that time which is probably why several of us ended up getting two desserts. Yes, two desserts – I’m on vacation! 🙂 It was not the best tiramisu I have had but the warm chocolate cake was good (I ate the middle). Renee & Michelle were not having

dessert and left to do a little duty free shopping. After we finished with our desserts, Stacy left to do some shopping as well. Kathy, Jana & I went up to the 14th deck because I wanted see what was up there. I had thought maybe we would be able to go outside, but it was enclosed. We walked back across the top deck, almost getting blown overboard! Okay, I exaggerate just a bit. But it was very windy. In fact not long after we went inside to Johnny Rockets they closed off the outside deck. Michelle & Renee were already there enjoying a milkshake for their dessert. Stacy joined us after finishing up her shopping and we sat chatting for awhile. We had to have our non carry-on luggage packed and outside our rooms by midnight and me being the rule follower I am was determined to do that so I headed back to my room to frantically pack (it was a little after 11 at this time). Jana and I packed while glancing out our little window at the massive waves. Hm, our ship is in Bermuda Triangle in the midst of a storm. If this was movie, it would be the scary part. I finished my packing with minutes to spare and put my suitcase out in the hall. I went to bed and listened the waves crashing before falling asleep.

Monday, March 17th
We had been given a departure time of 8 a.m. which meant another early morning wake up. Being the good Irish girl I am, I had deliberately packed a green shirt realizing that I would be gone for St. Patrick’s Day. Looking around at the people in line at customs, I was not the who planned ahead. Finally through customs we collected our bags and boarded the shuttle back to the airport. We said our goodbyes as Jana & I were headed for Disneyworld, but that is another story.

This entry was posted in Trip Report. Bookmark the permalink.