I’m too excited to sleep!

When we last saw our heroines, they had just gotten off the shuttle at the airport. I had been pleasantly surprised when Jana suggested we add on a couple of days to the end of the cruise and visit Disneyworld. So here we were about to board the Magical Express that would take us to the Happiest Place on Earth! We found out we had to catch the express in Terminal B so we decided to grab something to eat at the food court since we hadn’t eaten breakfast. We ran into the other girls at the food court so enjoyed one last meal with them before saying goodbye again. The Magical Express dropped us off at our hotel, Coronado Springs, where we dropped off our luggage before catching the bus to Animal Kingdom!
Our first stop in the Animal Kingdom was to try and get a fast pass for Kilimanjaro Safaris but all the fastpasses had been distributed so we decided to come back later and headed for Expedition 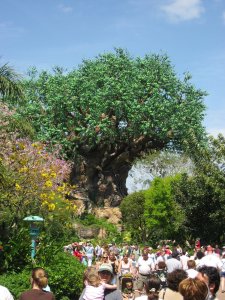 Everest. Standing in line a kid came over and asked if anyone wanted 2 fastpasses. Jana & I were a little slow in saying “Yes, I want them” so the people in line behind us got them and we waited. Fortunately the line kept moving and before we knew it we were boarding a train that would take us to the top of Mt. Everest. I’m a little chicken when it comes to roller coasters – especially ones that drop far or flip you upside down but afterwards I’m always glad I did it. We get off the roller coaster and Jana tells me she is on a roller coaster high and loves Disney!! After a lunch at Restaurantosaurus we went on the Kilimanjaro Safari, Pangani Forest Trail, and the Maharajah Jungle Trek before saying goodbye to Animal Kingdom and headed to Hollywood Studios (aka MGM – not sure when the name change occurred).
At Hollywood Studios, we headed straight for Rock ‘n’ Rollercoaster to check out the fastpass situation. As they had been all distributed and the single rider line was not open and the wait time was 100 minutes we decided to skip it this time. After all, there is always next time. And 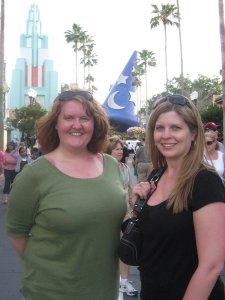 again, a little to my surprise, Jana was excited about making a return trip. As Michelle says, sometimes people don’t get Disney until they actually go. Next was the Great Movie Ride where the “second” ride operator scared Jana as he walked by to steal the treasure and yelled at her. She jumped about a foot in the air. We walked through the Streets of America and took a journey to Endor on Star Tours. We ate dinner at the Prime Time Diner and did a little shopping before watching Fantasmic, which is one of my favorite shows at Disney. And then it was time to head back our hotel. In our hotel room Jana tells me she is “too excited to sleep” just like the Disney commercial.
Tuesday, March 18th
We woke up ready for a full day and got on the bus for Epcot. First stop was to get a fastpass for 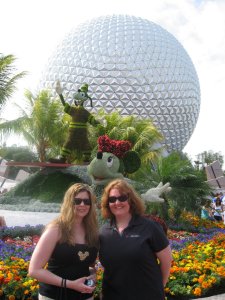 Soarin’. After grabbing some breakfast, we went on Living with the Land, a boat ride through greenhouses where they grow all sorts of vegetables and fruits, some of which are used in the different restaurants at Epcot. We then took a ride in a clamobile to find Nemo. We then headed for the World Showcase, taking a boat ride in both Mexico and Norway. We had lunch in where else 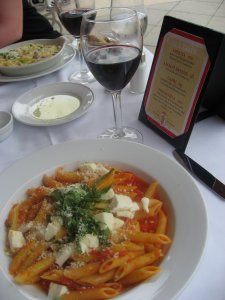 but Italy. I looked for margherita pizza, of course, but it was not on the menu. Instead I had penne caprese which is basically margherita pizza without the dough and instead with pasta. It was good. After lunch we finished touring the world, stopping in France to get our picture taken where the photographer kept asking if I had a cell phone I wanted to sell him. We didn’t get it until he pointed out the logo on my shirt, which was my employer’s logo. Oh, that’s why he was asking! We headed back to Soarin’ and had just gotten in line with our fastpasses when they closed the ride due to mechanical issues. Oh well, another thing to do next time. We headed for the monorail and were on our way to the Magic Kingdom!
We arrived at the Magic Kingdom just in time to catch the end of the 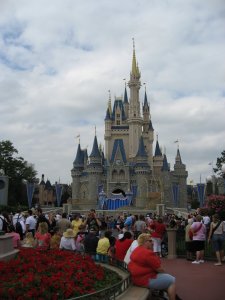 Dreams Come True parade. We headed over to Space Mountain to check out the fastpass situation. Once again all the fastpasses were distributed and the line was fairly long so we decided to check back later and see if the line was more reasonable. Next was the teacups (or coffee cups as Sydney calls them). Ever since Jana saw the Jon & Kate plus 8 episode where they went to Disneyworld and rode the Dumbo ride she was excited to ride the Dumbo ride so that is where we headed next. Snow White’s Scary Adventures was next followed by getting fastpasses for Big Thunder. We then headed over to Pirates of the Caribbean (one of my all time favorite rides), Haunted Mansion, It’s A Small World, and then got a fastpass for Peter Pan. Last time I found a new favorite, Mickey’s PhilharMagic which ended up being a favorite of Jana’s as well. We had dinner before heading back over to Big Thunder Mountain Railroad to use our fastpass. When we got off of Big Thunder we saw the wait time was only 20 minutes so decided to ride it again. We chose the right time! We breezed our way through and they let us into the fastpass line again. It was time to head to the castle for the Wishes Nighttime Spectacular. Disney definitely knows how to do fireworks! We headed over to 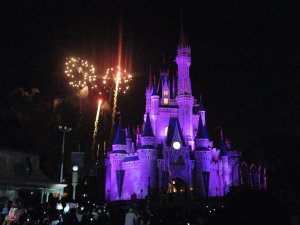 ToonTown and rode Barnstormer before touring Minnie’s house, followed by Mickey’s house. We waited in line for a bit to meet Mickey but the line was long and not moving so we decided to leave (we really tried Michelle!). We survived the Pooh ride (the ride operator greeted us with “Welcome back, you survived the Pooh ride” which both of us found hilarious). It was still another hour or so before we could use our fastpass for Peter Pan and both of us were tired and sore so we decided to see what the line was like for Peter Pan. The wait time said 60 minutes, but the line didn’t look that long. We asked and they told us the it was more like 40 minutes so we decided to go ahead and get in line. It ended up being only about 20 minutes. With that, we decided to call it a trip. We got on our bus and where our bus driver entertained us with trivia questions such as: How many cast members play Mickey? Answer: zero, Mickey is real! Getting off the bus I basically fell apart. The shoes I had worn the day before had given me blisters which had been further aggravated today. At the Magic Kingdom I could power through the pain because after all we were at the Magic Kingdom!! But off the bus there was no more magic left. I debated taking off my shoes, thinking my feet couldn’t hurt any worse, but decided against that and ended up walking on the grass as much as I could. I was so happy to get back to our hotel room so I could take off my shoes!
Wednesday, March 19th
We woke up, packed and checked out. We still had time before the our Magical Express would leave for the airport so we took the bus over to Downtown Disney for lunch and shopping. I had 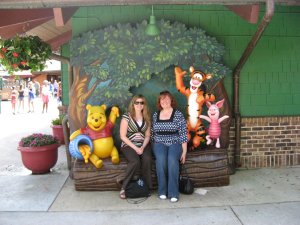 discovered Earl of Sandwich last time and was excited to eat there again. But the line was long and so we decided to eat at Captain Jack’s instead. It was good! After doing some shopping we got back on the bus and headed back to the hotel to catch the Magical Express. We said goodbye at the airport. My flight was late getting in and then further delayed due to weather issues but finally we arrived back in Seattle. Walking towards baggage I ran into a lot of people standing around. Turned out there was some sort of security issue and all the exits were locked. I was so tired and sore that all I wanted to do was go home and here I was standing, waiting for the security issue to be resolved. Finally they let us through and my trip was over.
Until next time!

This entry was posted in Disney, Trip Report. Bookmark the permalink.

1 Response to I’m too excited to sleep!