I Can Fly: Tinker Bell Half Marathon

Posted on February 6, 2012 by Emily
After months of looking forward to the Tinker Bell Half Marathon (and believing it to be way out in the distance) it had snuck up on me.  Here I was hurriedly packing and praying I wasn’t forgetting something vital (like say, race fuel which almost did get left behind).  Everything arrived intact (hooray!) and Friday morning I was up and ready to get my expo on!

I picked up my race number (go 3911!) and discovered to my astonishment I was in Corral B – this might be the only time I am seeded that high!  I breezed through the expo (much to my wallet’s delight) but spent some time in the official merchandise section, picking up a magnet, cup, & the ever important “I Did It” shirt.  My one disappointment?  Our goody bag was a plastic bag.  I had gotten it into my head that they would give us cool backpacks like the last time I did the Princess.  But no – we got an actual clear plastic bag.  Boo.

We spent the next two days at the parks (Jana, Jessica & I even got matchy-matchy shirts!).  It was warm enough that I went on the Grizzly River Rapids for the first time.  I also enjoyed a delicious corn dog.  And I went on the swinging version of Mickey’s Fun Wheel which quickly got renamed Mickey’s Wheel of Death.  Let’s just say I’m not a fan of the swinging cars – I’ll stick with the plain non-swinging cars from now on.   I left on the early side Saturday night (after World of Color – still no soundtrack that I could find) to get home and try to sleep. 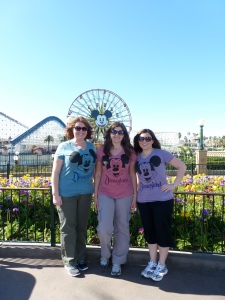 The alarm was set for way to early but I woke up before it went off and dozed off and on, intending to get up when the alarm actually went off.  But then I heard a woman laughing outside my room and I shot upright thinking I really had overslept and people were leaving for the race!!  But no, it was only 5 minutes later than it had been the last time I looked at the clock.  Being totally awake at this point, I got up and started getting ready.

One thing I really do appreciate about Disneyland (as opposed to Disney World) is that you can walk everywhere!  No waiting for buses!  I joined the masses of people walking towards the start line.  I tried to do a little stretching and calm my nerves, but those nerves were not going to be calmed.  I had brought my throwaway sweatshirt with me, but I realized it really wasn’t that cold, so I stuck it back into my bag.  And now I have my throwaway sweatshirt for the Princess Half! 🙂

We were told to start heading towards Corral B (did I mention I was in Corral B??  Still can’t get over that!) and I found a place to sit on the sidewalk until they started moving us closer and closer.

Soon it was time to start!!  I had tears in my eyes as we watched Corral A take off.  I was a little bummed there were no fireworks for the actual start (there were some during the National Anthem, but it wasn’t the same).  Animated Tinker Bell came on the big screen and sent us on our way!

I was a little nervous being in Corral B (seriously – probably first and last time being seeded that high!) but as we started out I was keeping pace with a lot of the people around me.  So maybe I was seeded correctly!  Another great thing about Disneyland?  I thought there was a lot more spectators lining the route.  We circled around the block (and by my hotel where I waved to Jessica, Jana & Ben who were probably still sleeping) and back into Disneyland.  Good thing we passed by my hotel so early on so I wasn’t super tempted to go crawl back into bed.  Ha!

I had told myself I could stop for my must have pictures – Captain Jack Sparrow, the castle, and of course Tink herself.  But as I passed by the princesses with their princes I really wanted to stop, except the line was super long.  Keep moving.  (Most of the picture lines were crazy long and I thought they weren’t moving as smoothly as I remember from WDW.)

We ran up into the castle but I didn’t see an official photographer but another racer kindly offered to take my picture.  Whew! 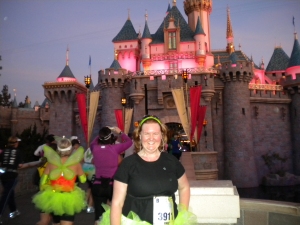 And then I saw Captain Jack Sparrow.  Done!  I waited in line and got my picture!

A little blurry but its still me & Captain Jack!

The course left Disneyland, wound through Downtown Disney and back to the streets of Anaheim.  Right as we were leaving Downtown Disney there was a huge contingent of the Red Hat society – they were awesome!!  I loved seeing the masses of red and purple!

The sun was definitely up at this point and it took me awhile before I remembered I had stuck my sunglasses on top of my head!  Whew!!  They were definitely needed.  And let me tell you, after months of training in rain, wind, and snow, I wasn’t sure what to make of running in the sun! 🙂

Since I had done a picture at mile 7 for the Princess, I decided I should do the same at mile 7 of Tinker Bell.  Plus there wasn’t a huge line!  I was about to ask the girls in front of me in line to take my picture when the person lined up behind me said she would take mine if I would take hers.  Done!

Over half way done!

It was definitely getting hot (or warm I should say).  I didn’t hit a wall, but I was starting to falter a bit so I alternated water and Powerade for the remaining water stops.  I think these were the longest miles of the entire race.  Long stretches of road.  But I was still able to alternate running for about a minute and walking for about 2 minutes.  And my knee was doing fine.  Thank goodness for the continued presence of bands, cheerleaders and spectators!

I hit 10 miles and my mantra became only a 5K left, only a 5K left.  I can do this.  I can do this.  Let me tell you I was never so happy in my life to see the Tower of Terror looming in front of me!  I made my way closer and closer to California Adventures until finally I was inside the park!  We zigged and zagged and I passed up the character photo stops (the lines were again really long but rumor has it that next to Sully from Monsters Inc was Tink – had I seen her I so would have stopped!).  I emerged out of CA Adventures and on to that last stretch.  The spectators were lining the streets and the energy just lifted me up.  I was so close.  But so close seemed so far away at that point.  Around one corner, then another and finally I saw the finish line!  I could feel myself put on that finishing sprint and I was across the line!  Hooray!

And the last song to come on my iPod before I crossed the finish line?  “A Dream is a Wish Your Heart Makes” – the Daniel Bedingfield version.  It was so meant to be!!

My cheer squad was there at the finish line.  I posed for pics, got my medal, and headed for the medical tent for some Biofreeze and an ice pack.

My time?  Officially it was 3:07, which on the one hand I’m very happy with (since it beat all but my secret goal) but on the other I am still on the wrong side of the elusive sub 3 hour mark.  I really should be more happy about this time since it is really only my second race back running post knee injury.  And I’m that much closer to a sub 3 hour since this ended up being a PR for me by about a minute (granted I did a few more picture stops at the Princess which was my previous PR – normally you wouldn’t think you’d try to PR a Disney race with all the distractions, but when that’s really all you’ve done in that distance it isn’t hard!).  If I keep whittling away at my time that sub 3 half will be mine!

I waddled back to the hotel and got ready to start the day! 🙂  My medal & I proudly went to the parks where I enjoyed lots of congrats and high fives.

Me & my cheer squad

The only other character stop I did - another Captain

This entry was posted in 34 Things, Disney, Race Report. Bookmark the permalink.

12 Responses to I Can Fly: Tinker Bell Half Marathon