Wow.  Just wow.  What started as a little tiny crazy idea at the beginning of 2012 to run 5 half marathons in honor of turning 35 is now complete.  And instead of 5, it turned into 7!!  (Anyone else think it is funny and fitting that 5 times 7 is 35?)  It started off with coast to coast girly races in the form of Tinker Bell and Princess and was followed by a pair in the PNW (Portland and Seattle) where I finally broke the ever elusive 3 hour mark.  It then came close to being derailed with a diagnosis and resulting surgery to remove what turned out to be a (thankfully) non-cancerous mass.  But before it could be completely derailed, Lacamas Lake happened where I fought the hill and I think the hill might have won.  Technically I was done with my 5 but I didn’t stop there!  Post surgery and post surgery recovery, I started running again.  Or you know, running with a lot of walking but it is way easier and way less words to say running.  Next up, a training run that turned into the Seattle Half.  Which brings us all the way up until now.  Number seven!  Seriously, it boggles my mind.

Vegas was meant to be my pinnacle.  Not only the fifth half of 2012, but in the fifth state.  For awhile there, especially right after surgery, I didn’t think it was going to happen.  But it did.  I think walking nearly every day during my recovery helped to not only speed up my healing, but speed up my return to running.  At the beginning I wasn’t sure if I was going to ever get back as I was moving at slower than a snail’s pace, but slowly my strength started to return.  I’m still not quite back to 100%.  That pesky 1% or so seems to take the longest!!

Okay, enough with the background noise.  On to the show!

I arrived Friday night, flying in on a super new plane that had a new car smell (rumor had it the plane was 24 days old!).  I checked in to my hotel, walked around and then went to bed.  I lead such an exciting life, don’t I?

Saturday morning I started the day off with what has now become somewhat of a ritual – getting my nails done to match my outfit.  I met up with my aunt for lunch before walking over to the expo (she was volunteering at the expo).  This expo was huge!!  Well, as compared to the Seattle Half expo.  I picked up a few goodies and started meandering around, seeing what else I *needed*.  Of course I needed a red Team Sparkle skirt (for my upcoming 12Ks of Christmas).  I picked up a few other things before sitting down to listen to Suzy Favor Hamilton.  Can I just say I love her?  I loved her advice of just have fun – what is the worst that can happen?  Afterwards, she remembered me and gave me a big hug and asked how I had done in Seattle (the last time I ran into her).  She is so sweet. 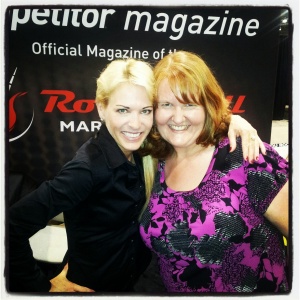 I finished up at the expo and dropped my goodies off at the hotel.  I decided to try my luck at the tables for a little bit.  Oh craps!  I was super intimidated to go up to the table myself and put my money down.  But I stood next to the dealer and asked questions when I wasn’t sure what to do.  It was fun.  Sometimes it is good to go out of your comfort zone.  After that it was dinner and then yes, another early night.

It was really weird waking up Sunday morning, knowing I was going to run, but not until later.  I had a lazy morning, finally leaving the room to eat an early lunch.  Food was the hard part – what to eat and when?  I ended up at one of Wolfgang Puck’s restaurants where I had an egg and bacon sandwich. 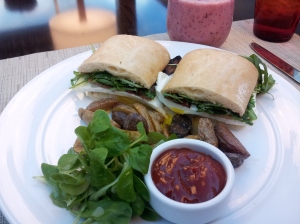 I ventured back to the craps table for a bit (easy come, easy go is what I’ll say about that little outing) before heading back up to my room.

It came time to get ready and I headed down to the lobby to catch the shuttle over to the start, but not before some last-minute wardrobe and gear check questions.  Bring this?  Wear this?  I decided on no gear check and no extra clothes.

At the start area, I watched the beginning of the marathon, used the real bathroom at Mandalay Bay, and the port-o-potty.   Thank you to the girl who told me my skirt wasn’t quite right after the trip to the port-o-potty.  Phew!  I’m not sure how many people I passed before she told me, but hey I probably won’t ever see these people again.  We were treated to a little performance by Ka before being herded into our corrals.

It was then that I noticed the wind had really picked up.  And I mean it was windy!!  We shuffled along towards the start line as the sun continued to drop.  I ducked out of line one last time to use the port-o-potty.  And then we were off!

The wind was brutal.  It wasn’t constant, thank goodness.  And when it was at your back it was nice.  But it seemed like more often than not we were running into the wind.  (I heard on the news later the gusts were around 20 to 30 miles per hour).

Down the Strip we went, which was awesome.  One of the perks of doing a race is being able to experience a city in ways that you wouldn’t otherwise.  When else are you going to run down the middle of Las Vegas Boulevard?

Past Paris, past Caesar’s, past the finish line where people were already finishing (the joys of starting in the way back), and towards the Stratosphere.

I had come in with hopes of this flat course propelling me to a new PR, but pretty early on, I realized it was probably not in the cards.  My IT band / hamstring started bothering me.  It wasn’t a horrible pain, but it was there nonetheless.  This has been acting up on and off for the last few weeks.  I also did a lot of weaving in this race, more so than normal.  Sometimes it was hard to go around and I felt myself slow down until a break came where I could more easily pass someone.  But here’s where Suzy’s talk came into play?  What’s the worst that could happen?  I wouldn’t finish under 3 hours and I might walk more than normal.  It is not the end of the world.

Past the Stratosphere we went and into downtown Las Vegas.  I don’t really remember this section at all.  After what seemed like a lot of zigs and zags we were finally heading back towards the lights of the Strip.

The sign for the Mirage came into view, but as its name suggests, it felt like a mirage.  Was that really the finish line in the distance?  I felt as if I were in slow motion (which I probably was at that point).  And then I was at the finish line.  Done!!

It definitely was not a PR, but at 2:52:01 it was still under 3 and a few seconds better than last week’s Seattle Half.

The next morning dawned and it was time to go home.  Thank you Vegas for a fun race!

This entry was posted in 5 in 2012, Race Report, Race the States, Recovery and tagged rock 'n' roll, Vegas. Bookmark the permalink.