Another morning, another country!  Part of the reason we did this cruise was because Jessica really wanted to see the Church on Spilled Blood.  To get into Russia, you need a Visa and its a slightly complicated process.  However, if you arrive on a cruise ship, you can enter Russia for 72 hours Visa free.  Hello, cruise!

I will have to say I was the most nervous heading into Russian customs but it was fairly painless and soon we were on our way into St Petersburg!!

Since we were there Visa free, and getting stuck in Russia was not an option, we decided not to visit anything, but similar to Tallinn, would instead just do a photo tour. 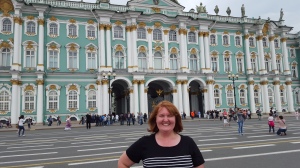 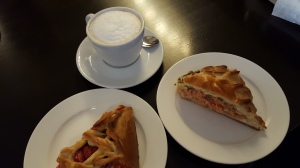 Rumor has it beef Stroganoff was named after the Stroganov family. 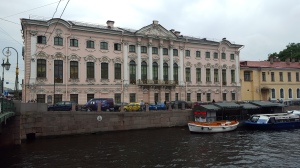 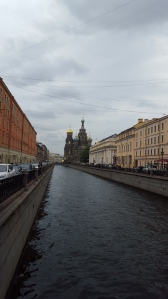 Approaching the Church on Spilled Blood

Of course it started raining as we got to the Church on Spilled Blood.  And the church wasn’t open on Wednesdays so we were only able to gaze at the outside.  But what an outside!  It really was incredibly beautiful! 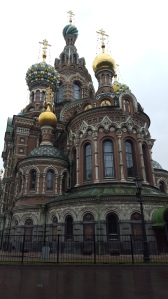 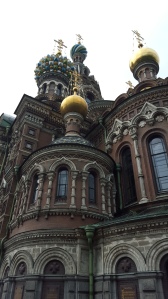 After we left the Church on Spilled Blood, the rain cleared and the sun came out. 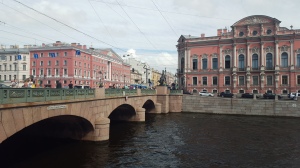 I love the pink building!

Trying to decipher the Cyrillic alphabet was interesting!! 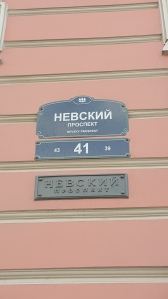 Before long it was time to head back to the ship.  Russia was one place I did not want to get stuck!

This entry was posted in Sabbatical, St Petersburg, Travel, Trip Report and tagged Church on Spilled Blood. Bookmark the permalink.